I love sunrises too much to even consider living on Mercury if it were possible. Your kids will enjoy learning about Mercury sunrises, its speed, layers and more using this Planet Mercury Unit Study. 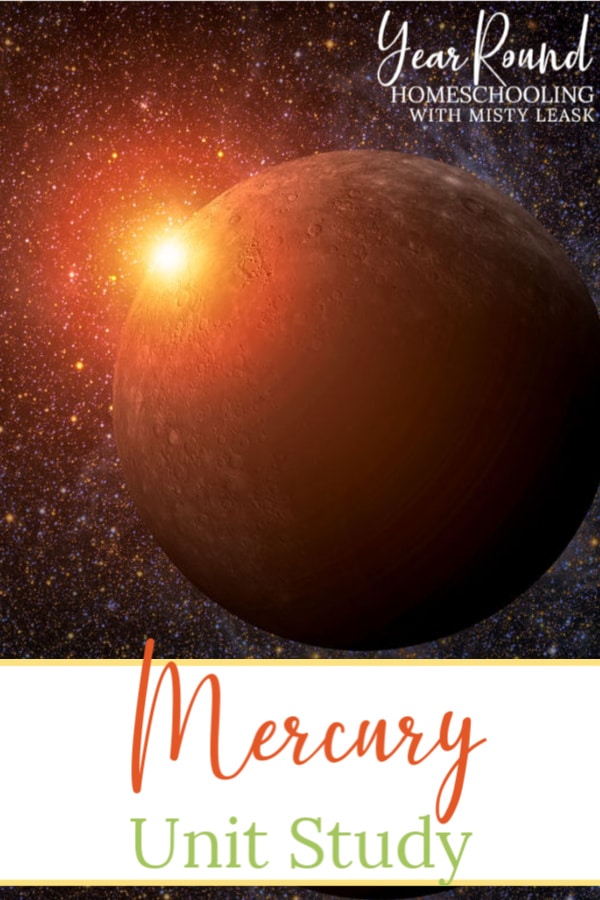 The solar system is a great way to study science in your homeschool. Spending time together with your kids studying the planets, their moons and view them in the night sky make amazing memories.

Mercury may be small, but there is a lot to learn about this “little” planet. Enjoy learning new things with your children as you complete this unit study together.

Did you know? Mercury has the shortest year, the smallest axis tilt and has the most craters? It also is the fastest planet though it spins slowly!

It was first explored in 1974 by NASA’s spacecraft, Mariner 10. They later completed the first orbit around Mercury using their spacecraft, Messenger, in 2008.

Mercury is a terrestrial planet, like Earth. However, it is only 1/3 the size of our home planet.

The planet Mercury was named after the messenger god of the Romans.

Mercury is the smallest planet in our solar system.

The radius of Mercury is 1,516 miles. You can easily figure out the radius of any planet on your own by using the distance from the center to the edge of the planet.

Mercury’s diameter is an average of 3,031.67 miles. Finding the diameter of a planet is easy once you know its radius. Simply take the radius and multiply it times two.

The mass of Mercury is 330,000,000 trillion metric tons, making it the least massive planet in our solar system.

Mercury’s volume is 14,593,223,446 miles3. Do you know how to measure volume? You’ll need this mathematical formula, V = 4/3 pi x r^3,  and the radius of the planet. The measure of volume determines how much space a three-dimensional object such as a planet occupies.

At 5.427 g/cm3, the planet Mercury is the 2nd most dense planet in our solar system.

Mercury is the closest planet to the Sun.

All planets in the solar system are always moving, but on average Mercury is 32,983,125 miles from the Sun.

It only takes light from the Sun 3.03 minutes to reach Mercury.

Mercury has 3 layers; the core, a mantle and a crust. The core is 1,289 in radius and is made of metal. The outer shell is made of the mantle and crust and is approximately 250 miles thick.

It takes less than 3 months, 88 days on Earth, for Mercury to travel around the Sun. Mercury travels through its orbit at approximately 29 miles per second.

Mercury spins slowly on its axis, so a complete axis rotation or day on Mercury is equal to 59 Earth days.

Since Mercury is so close to the Sun, it doesn’t really have an atmosphere, instead, it has an exosphere. Mercury’s exosphere is made up of oxygen, sodium, hydrogen, helium and potassium.

How to Draw Mercury

Mercury on a String

Fill in the Blank Mercury Facts

Mercury is an amazing little planet and its size doesn’t keep it from amazing us. The wonder of this planet and the rest of the solar system truly point to the majesty of God.

What did your kids enjoy learning the most through your Planet Mercury unit study?

Close Menu
×
54
To help personalize content, measure adverts and provide a safer experience, we use cookies. By giving consent, you agree to allow us to collect information through cookies.OkNoRead more