It is likely that you have seen Venus in the sky many times without even realizing it! Your kids will enjoy learning Venus’ nicknames, its topography, size and much more through this Planet Venus Unit Study. 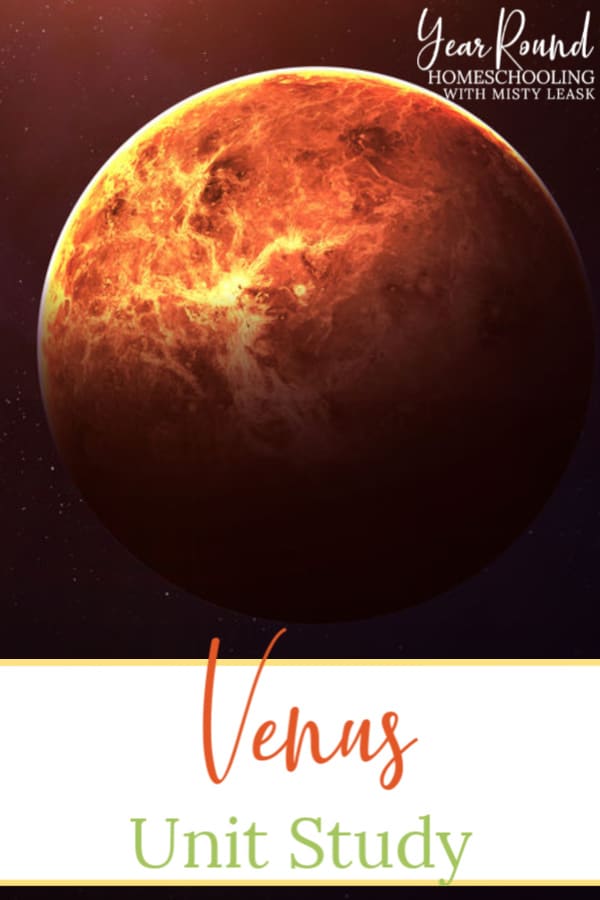 Science isn’t always a child’s favorite subject, but the solar system can make it a bit more fun! Grab a blanket and spend time together outside gazing into the night sky to inspire them to want to learn about what they see.

Taking time to teach and learn alongside your kids is one of the biggest blessings and opportunities that a homeschool mom has. Enjoy discovering new things as you study the planet Venus together!

Our closest neighbor in the solar system is Venus and the planet is referred to as ‘Earth’s sister’ due to the similarities of the two planets.

Venus, a terrestrial planet, is the brightest object in the night sky after the Sun and Moon.

Since Venus rotates in the opposite direction of most planets, East to West, one day-night on Venus is equal to 117 days on Earth.

On Venus, one day-night cycle takes 117 Earth days because Venus rotates in the direction opposite of its orbital revolution around the Sun.

Venus has both volcanoes and mountains with Maxwell Montes being the planet’s highest mountain at 20,000 feet high.

On Jan. 31. 2019 a Japanese spacecraft, Akatsuki, discovered a giant streak among the clouds on Venus.

The planet Venus was named after the Roman goddess of love and beauty. It’s nicknames are ‘The Morning Star’ and ‘The Evening Star’ because it rises and sets each day.

Venus is the 6th largest planet in the solar system. It is similar in size to Earth.

The radius of Venus is 3,760 miles. To determine a planet’s radius you measure the distance from the center of the planet to the edge of the planet.

Figuring out the diameter of a planet is easy once you know its radius. Simply take the radius and multiply it times two. By doing so, you’ll find that Venus’ diameter is 7,520 miles.

Venus’ mass comes in at 4,870,000,000 trillion metric tons, making it the 3rd most massive planet in our solar system. Weight and mass can be confusing, so be sure not to confuse them. You measure mass by how much matter an object has within it.

Venus is the 2nd planet from the Sun.

The planet Venus is always moving, just like the rest of the planets in our solar system, but on average it is 67,391,286 miles from the Sun.

It takes 6.03 minutes for the light from the Sun to reach Venus.

The planet Venus has three layers. The iron core has a 2,000 mile radius, followed by a mantle of hot rock and the surface is made of an always moving thin layer of rock. Consider. Why is Venus’ surface always moving?

The planet Venus travels at 78,339 miles per hour. Do the math! How many miles does Venus travel in one 24 hour day on Earth?

Venus orbits the Sun in 225 Earth days — nearly a year on Earth!

It takes Venus 243 days on Earth to complete a rotation on its axis making it the slowest rotating planet in our solar system.

Venus has a thick atmosphere that is made up of mostly carbon dioxide. It is because of its atmosphere that Venus is the hottest planet even though it isn’t the closest planet to the Sun. The heat from the Sun gets trapped in Venus’ atmosphere creating a greenhouse effect.

How to Draw Venus

What did your kids enjoy learning the most through your Venus unit study?