Ice isn’t something that I often associate with the Solar System. However, while the temperatures on some planets may be extremely hot, this Saturn unit study will teach your kids just how cold and icy a planet can be! 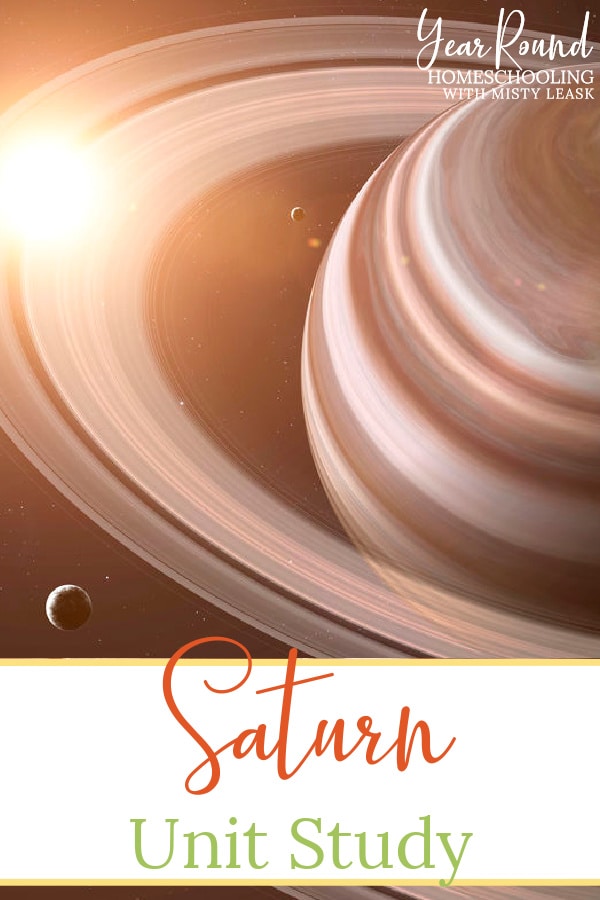 The more I teach my kids and create resources for you to use with your children, the more I am in awe of the universe. The very hand of God is seen in absolutely everything.

Studying the night sky is just one way that you can spend time together as a family learning about stars, planets and the galaxy above this place we call home.

Take a moment with your kids and gaze into the night sky. You never know what planet or constellation you’ll see.

Even though Saturn is the most distant planet from Earth at 912.66 million miles away, it was first seen by the unaided human eye. That means this planet was discovered without the use of any telescopes or other sky-gazing equipment.

Saturn is known as the “Ringed Planet”, but it is not the only planet with rings. However, its icy ring system are amazing to behold. By using a telescope you will likely see 3 of Saturn’s rings. According to spacecraft though, Saturn has more than 30 rings around it!

While Earth is a terrestrial planet, Saturn is a gas giant. This means that the planet Saturn is mostly made up of hydrogen and helium.

Saturn is surrounded by more than 50 moons with more awaiting confirmation!

The planet Saturn was named after the Roman god of agriculture and wealth, who happens to be the father of Jupiter.

Saturn is the 2nd largest planet in our solar system.

The radius of Saturn is 36,183.7 miles. To find the radius of a planet you need the distance from the center to the edge of the planet. You can figure out the radius if you know the circumference, diameter or area using these formulas.

In order to find the diameter of Saturn, you’ll need to take the radius and multiply it times 2. In doing so, you’ll find that Saturn’s diameter is 72,367.4 miles.

Saturn is the 2nd most massive planet in the solar system at 569,000,000,000 trillion metric tons. That makes Saturn’s mass 95 times larger than Earth. Be sure not to confuse mass with weight. The difference between weight and mass is that weight is determined by the pull of gravity on an object.

The volume of Saturn is 198.44 trillion cubic miles. The measure of volume determines how much space a three-dimensional object such as a planet occupies. To find Saturn’s volume on your own you’ll need this mathematical formula, V = 4/3 pi x r^3,  and the radius of the planet.

The planet with the lowest density in the solar system is Saturn. At 687 kg/m³ Saturn would float if placed on the water! You can convert the density of Saturn to lbs/gallons using this conversion tool.

The rings of Saturn are made up of billions of pieces of ice and rocks thought to have broken off of asteroids, comets or moons. Some of the pieces making up these rings are tiny, while others could be the size of your home. Saturn’s ring system is massive in size – extending up to 175,000 miles around the planet. However, the height of the ring system is only about 30 feet.

Recently, Saturn became the planet with the most moons with more than 50 confirmed and nearly 30 waiting for confirmation. While not all of Saturn’s moons have been named, Titan and Phoebe are two of the most known.

Saturn is the sixth planet from the sun.

Since planets are always moving, how far they are from the sun changes. However, on average Saturn is 931,528,731 miles away from the sun.

It takes 79.3 minutes for light from the sun to reach Saturn. Being the 6th planet from the sun, if there were life on Saturn they would be one of the last ones to see the sunrise every day.

Saturn doesn’t really have a surface, but it does have a dense middle core. This core is made up of metals like iron and nickel that are surrounded by rocky material. These are solidified by pressure and heat. They are covered by liquid metallic hydrogen inside a layer of liquid hydrogen.

Saturn travels at approximately 21,637 miles per hour as it makes its way around the sun. That means in one 24 hour day that Saturn travels 519,288 miles!

Saturn’s orbit around the sun is a rather slow one. It takes more than a year or 10,000+ days on Earth for the planet to complete one trip around the sun. The average velocity that Saturn travels through its orbit is 6.01 miles per second.

A complete axis rotation for Saturn or a day on Saturn takes only 10.6 hours.

Saturn: Jewel in the Creator’s Showcase

How Old are Saturn’s Rings?

How to Draw Saturn

Jewel of the Solar System

Saturn from the Inside Out

What did your kids enjoy learning the most through your Saturn unit study?