Why You Need to Teach Kids About Presidents’ Day

Sometimes holidays get lost in the hustle and bustle of everyday life. There are quite a few silly ones that it’s okay to not cover in our lessons, but one that we should make sure to teach kids about is Presidents’ Day. 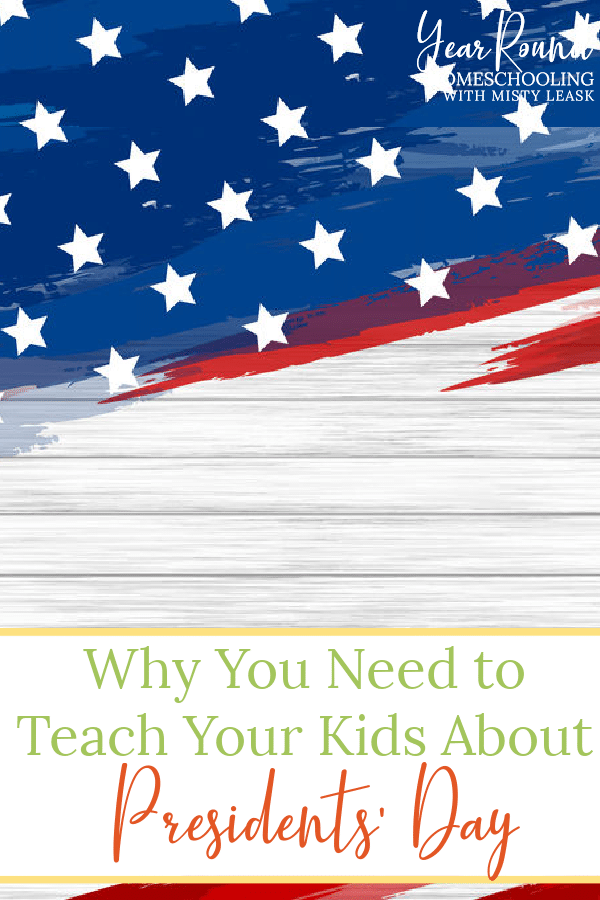 What we need to teach our children is to remember these Presidents who have helped to shape the United States of America.

Why It Is Important to Teach Kids About Presidents’ Day

Presidents’ Day began as a celebration of George Washington’s birthday, the first president of the United States back in the 1880s. In 1968, Congress combined Washington & Lincoln’s birthdays into a joint holiday, Presidents’ Day.

George Washington is an important man to remember and celebrate on Presidents’ Day because of his role as the Commander of the Continental Army. He and his troops fought for independence against the British and won.

After claiming independence, there was a lot of work to be done in forming a government to rule the nation.

Washington was famously known for encouraging cooperation between parties as well as the north and the south which were already deeply divided on issues of slavery and the nation’s budget.

Washington was beloved by many and was an undeniable force in the shaping of the United States of America. He ruled for the people and worked with other government officials to make sure the voice of the people was heard and listened to. For this reason, it is important to remember him and what he did for our country on Presidents’ Day.

The other man we celebrate on Presidents’ Day is Abraham Lincoln. The 16th President of the United States, who served our country from 1861 – 1865.

Lincoln was President during another very important time in our country. He was the Commander in Chief of the Union North during the Civil War between the Union and the Confederate South.

Always publically against the institution of slavery, Lincoln’s election’s pushed the South into secession from and war with the North in 1861.

Lincoln delivered the Emancipation Proclamation declaring that all slaves were freed on January 1, 1863, which eventually led to the ratification of the 13th Amendment in 1865.

The 13th Amendment made it so that the institution of slavery could no longer exist in the United States.

The Gettysburg Address was delivered on November 19, 1863, at the dedication of a national cemetery in Pennsylvania near the site of the Battle of Gettysburg.

“Four score and seven years ago our fathers brought forth on this continent a new nation, conceived in Liberty, and dedicated to the proposition that all men are created equal.”

Lincoln went on to speak on the importance of working together and making sure that the men who died there had not done so in vain and ended his speech as follows.

“…this nation, under God, shall have a new birth of freedom—and that government of the people, by the people, for the people, shall not perish from the earth.”

Both Presidents Washington and Lincoln fought for unity and equality when our nation was young. They knew the importance of working together and making sure that everyone in our nation was treated fairly and equally.

It is important to discuss these Presidents with our children so they will know the building blocks upon which our country is built and how hard the freedoms we now enjoy were fought for.

I encourage you to visit whitehouse.gov and history.com to further explore the lives of these men to share with your kids.

If it weren’t for these two men, our lives and country would look a lot different, so Presidents’ Day is important to remember.