Uranus is a unique planet, to begin with, because it sits differently in the sky. Your kids will learn all about this icy, blue planet through this Uranus Unit Study! 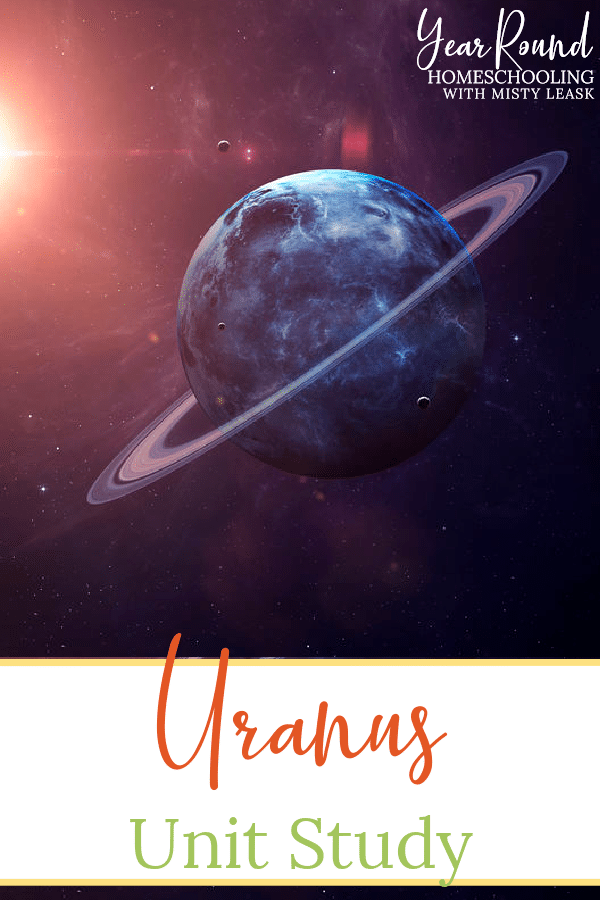 While science has never been my favorite subject to study or to teach, I discovered that the planets and stars were topics I truly enjoyed both learning about and teaching.

Your homeschool science class doesn’t have to be filled with memorizing or learning technical facts, lab projects or textbooks you need a dictionary to decipher. Science is supposed to be fun, fill you with wonder and encourage your kids (and you!) to explore!

The Solar System is amazing and you don’t have to be a scientist to know that. An evening spent laying outside underneath the night sky is all you need to understand the beauty it holds.

William Herschel was the first astronomer to discover a planet, Uranus, with the use of a telescope in 1781. However, it wasn’t until 2 years later that Uranus was accepted as a new planet.

Uranus is an ice giant that has the shortest day in our Solar System. It is nearly 4 times bigger than our planet, Earth!

As with many planets, Uranus has a nickname. It is known as the “Sideways Planet” because it rotates on its side on a nearly 90-degree angle. This tilt causes extreme seasons to occur on the planet. One side of Uranus receives direct sunshine for nearly 20 years at a time, while the other side experiences a frigid, cold winter.

While the planet Uranus is named after a Greek god, originally the astronomer that discovered the planet wanted to name it after King George III.

Uranus is the 3rd largest planet in our solar system.

The radius of Uranus is 15,759.2 miles, making it 4x wider than our home planet, Earth! To find the radius of a planet you need the distance from the center to the edge of the planet. You can figure out the radius if you know the circumference, diameter or area using these formulas.

In order to find the diameter of Uranus, you’ll need to take the radius and multiply it times 2. In doing so, you’ll find that Uranus’s diameter is 31,518.4 miles.

At 8.68 x 1025, Uranus is 14.5 times more massive than Earth. Be sure not to confuse mass with weight. The difference between weight and mass is that weight is determined by the pull of gravity on an object.

The volume of Uranus is 6.83×1013 cubic kilometers. You could fit 63 Earth’s inside of Uranus! The measure of volume determines how much space a three-dimensional object such as a planet occupies. To find Uranus’s volume on your own you’ll need this mathematical formula, V = 4/3 pi x r^3,  and the radius of the planet.

Uranus has two sets of rings; an outer and an inner set, for a total of 13 rings. They vary in color based on their location and include grey, reddish and blue.

Uranus is the seventh planet from the sun.

Since planets are always moving, how far they are from the sun changes. However, on average Uranus is 1,793,610,684 miles away from the sun.

It takes 2 hours and 40 minutes for light from the sun to reach Uranus.

Since Uranus is an ice giant, it doesn’t really have a surface. At least 80 percent of Uranus is made up of “icy” materials including; water, methane and ammonia. The core of Uranus is small and rocky.

It takes approximately 84 years on Earth for Uranus to complete one trip around the sun.

One day or a complete axis rotation for Uranus takes only 17 hours.

While helium and hydrogen dominate the planet’s atmosphere, methane, water and ammonia are present. Uranus gets its blue color due to the presence of methane in its atmosphere.

The Energy Balance of Uranus

How to Draw Uranus

What did your kids enjoy learning the most through your Uranus unit study?