The History of The Pledge of Allegiance

Teaching our children about the history of the United States of America is essential to their education. They need to know and understand its history in order to connect with and support our great nation. The Pledge of Allegiance is an important part of the United States of America, but do your kids know who wrote it or when? Do they know that there have been several changes made to the pledge? This history lesson will teach them all that and more! 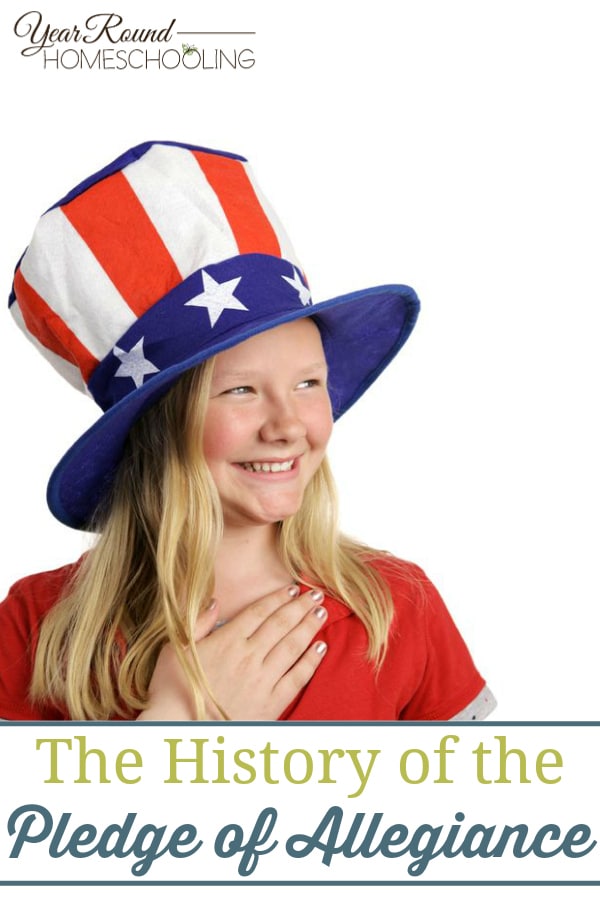 The History of The Pledge of Allegiance

Daniel Sharp Ford, the owner of the magazine, The Youth’s Companion, was on a mission to have every school in America fly an American Flag. He asked Francis Bellamy to write a Pledge of Allegiance to the flag as he hoped it would encourage the patriotism of Americans. The Pledge of Allegiance was written and published by Francis Bellamy in 1892 to promote patriotism and to celebrate the 400th Anniversary of Columbus Day.

Originally the salute to the American Flag was referred to as the “Bellamy Salute” and the right arm was stretched out straight in front of you pointing slightly upward to the sky. After the start of World War 2 the similarities of the “Bellamy Salute” and the Nazi regime caused Congress to change the Flag Code on December 22, 1942. From that time forward Americans have recited The Pledge of Allegiance with their right hand over their heart.

The Pledge of Allegiance has gone through several changes over the years. Francis Bellamy’s original pledge was…

“I pledge allegiance to my Flag and to the Republic for which it stands, one nation, indivisible, with liberty and justice for all.”

However, in 1923 the National Flag Conference changed it to…

“I pledge allegiance to the Flag of the United States of America and to the Republic for which it stands, one nation, indivisible, with liberty and justice for all.”

The final change to The Pledge of Allegiance was made on Flag Day, June 14th, 1954 by Congress with the encouragement of President Dwight D. Eisenhower. He believed that adding the words “Under God” would remind Americans that, “…we are reaffirming the transcendence of religious faith in America’s heritage and future; in this way we shall constantly strengthen those spiritual weapons which forever will be our country’s most powerful resource in peace and war.”

It is thanks to President Dwight D. Eisenhower that we are able to recite The Pledge of Allegiance today and be reminded of our heritage and the role that religion has played in building our great nation!

“I pledge allegiance to the flag of the United States of America, and to the republic for which it stands, one nation under God, indivisible, with liberty and justice for all.”

The only way that there can be any changes made to the current Pledge of Allegiance is if the United States President were to consent.

What did you learn about The Pledge of Allegiance that you didn’t know?