Election Day is an important topic that we need to teach in our homeschool. Voting is a life skill that our children need to understand. If we neglect teaching them that their votes matter they will be less likely to vote on Election Day. This Election Day Unit Study was designed to make learning about voting, the electoral college and Election Day simple and fun.

All About Election Day Unit Study

What is Election Day?

Election Day in the United States is held on the first Tuesday of the first full week of November every year. The purpose of Election Day is for citizens of the U.S. to cast ballots with their votes for Congressmen, Senators, Presidents, Vice Presidents, etc.

Why is Election Day Important?

The importance of Election Day is found in the freedom we have as citizens of the United States. Not only do we have the right to choose our government officials, but it is a privilege as well. While politics may not be everyone’s interest, it is through Election Day that we have the opportunity to vote for officials that stand for the beliefs we have, for policies that will better our country and for our freedoms. If we decide to not vote in an election, we are essentially choosing to allow others to determine what our country will become. Your vote matters.

Election Day is important because it gives YOU a voice to show what you believe is important for the future of our country.

The History of Election Day

Prior to 1845, elections weren’t held on any specific day throughout the country. As long as elections were held before the first Wednesday in December, states could hold them whenever they wanted. This caused problems due to reports of early election turnouts resulting in the swaying of voter turn out in other states.

There is actually a reason why we vote on a Tuesday in November. The farmers of America made up a great number of citizens in the 19th century. It was their market schedule, the travel time it took for them to reach voting locations and their growing/harvest season that caused Congress to choose both a Tuesday and a November Election Day in 1845.  The first President to be elected after this law was enacted was Zachary Taylor in 1848.

African Americans were not allowed to vote in any elections until the 15th Amendment on February 3, 1870. However, it wasn’t until nearly a century later that African Americans were allowed to vote freely after the Voting Rights of 1965 was passed. Prior to 1965 many states required slaves to be able to read or own property in order to vote as part of the Jim Crow laws.

Women’s rights to vote weren’t recognized until the Women’s Sufferage movement brought to Congress in 1878. It wasn’t until 42 years later that the 19th Amendment was ratified by the states and women were granted the right to vote in August of 1920. However, the state of Wyoming allowed women to vote prior to the 19th Amendment. Louisa Ann Swain was the first woman to vote in Wyoming in 1870.

Native Americans were given the right to vote in 1948, but it wasn’t until 1962 that it was legal in all 50 states with Utah being the last state to give Native Americans voting rights.

How Often are Elections Held?

What are the Requirements to Become President of the United States?

How Long Can a U.S. President Be in Office?

Once a U.S. President you can only be in office for two terms, a total of 8 years.

What is the Electoral College?

The Electoral College is a process that was put in place by our founding fathers to ensure that all the people of the United States were represented equally in electing the Presidents.

How Does the Electoral College Work?

The total number of electoral votes in the U.S. is 538 and in order to be elected President, you must receive 270. Aside from Maine and Nebraska, the state’s entire electoral vote is given to the winner of the most votes received in each state.

Why is the Electoral College Important?

The importance of the Electoral College is to allow citizens of the United States living in smaller states to have the same value to vote for the President as those in larger states.

How is it Decided How Many Electoral Votes Each State Hold?

Each state is assigned a specific number of electoral votes based on the number of senators and representatives in its delegation.

How Many Electoral Votes Does Each State Represent?

What Would Happen if There Weren’t an Electoral College?

If the U.S. were to allow Presidents to be elected through the use of popular votes, states like California, Texas, Florida and New York would be able to determine which candidate won the election. This would make the citizens’ voices of states such as Wyoming, Maine and Rhode Island null and void.

Why Should You Vote?

Every citizen of the United States has the right to vote for the candidate(s) that they feel has their best interest in mind. This is a tremendous blessing. The future of the United States is in the hands of those that choose to make their voices heard. Voting is one way that you can make your opinions and beliefs heard. If you choose not to vote, then you are giving away your voice and right to an opinion on how the government is being run.

Where Do You Register to Vote?

How Do You Know Who to Vote For?

Knowing who to vote for is important. You don’t want to just pick someone on the ballot based on their name, appearance or party they are representing. Your vote should be decided after much research and prayer. Take time to listen to candidate speeches, party debates, visit their websites, research their voting and political history, find out what their beliefs are regarding important topics such as same-sex marriage, abortion, religion and homeschooling for instance.

How Do You Vote on Election Day?

In order to vote on Election Day, you’ll need to show up in person or submit an absentee ballot (if the state allows). Online voting is not allowed for U.S. elections. Polling locations are often public high schools, city halls,

You Voted, Now What?

Once you’ve submitted your ballot you’ll have to wait until the entire United States has had the opportunity to vote as well. Those of us that live on the East Coast have a long night of waiting ahead of them as the West Coast is 3 hours behind. You can wait up to see who will be the new President of the United States or go to sleep and rest knowing that God sets up those in authority and holds the future in His hands.

Ways You Can Help Election Day

Candidates need help getting their names and platforms out there. Many political parties are in need of people that will make phone calls and hand out signs and flyers for their candidates. This is a great way to help increase voter turn out, learn more about the candidates running and make a difference in the future of your state and/or your country. 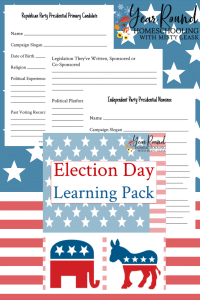 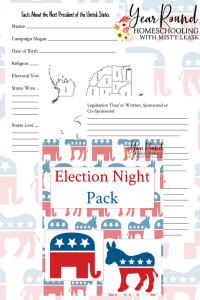 What did you learn about Election Day that you didn’t know before?