Learning all about ‘The Gem State’ is easy and fun using this Idaho State Study with your kids for geography! 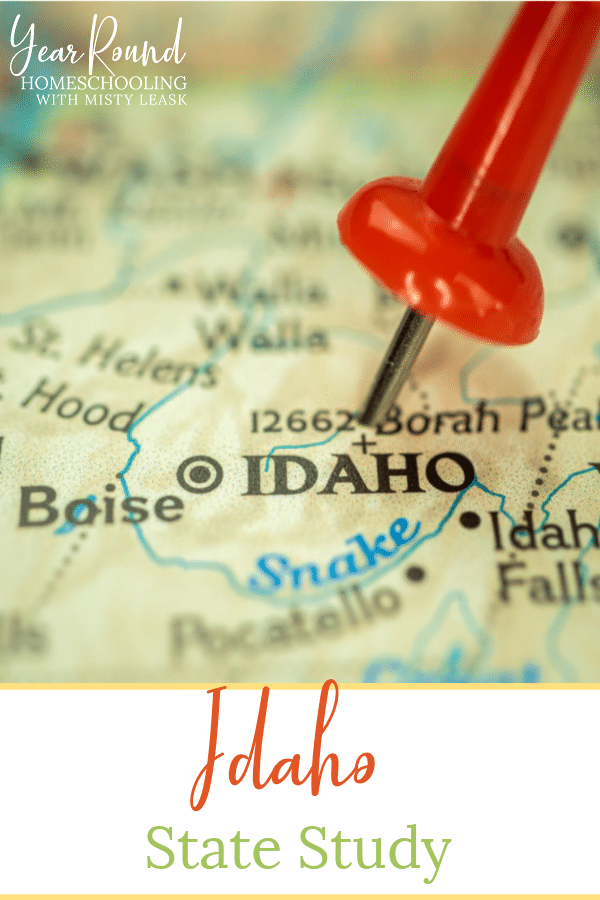 Idaho isn’t a state that I have ever really wanted to visit. Eventually, I’d like to have visited all 50 of the states in the US, but Idaho isn’t one I’ve particularly looked forward to visiting. However, my husband would probably really like to visit because of the state’s history of gold mining.

While completing the state study of Idaho, I found it interesting that you can sail to the Pacific Ocean from Idaho! Also, I didn’t realize that Hells Canyon was in Idaho.

History of the State of Idaho

The word Idaho was thought up by a mining lobbyist, George M. Winning. He originally suggested the name for the state we now know as Colorado claiming the word was of Shoshone origin and meant “gem of the mountains”. Several American Indian tribes including the Shoshone were consulted, and no word similar was ever found. Eventually, the name Colorado was chosen for that territory. Three years later when the territory of Idaho came up to be named by Congress, they simply went with the previous suggestion, Idaho, completely forgetting that it has no American Indian origin.

Esto Perpetua, meaning “be eternal”, was adopted as part of the State seal in 1891.

Idaho was given the nickname, ‘The Gem State’, because of its many natural resources.

In 1931, ‘Here We Have Idaho’ was chosen as the official state song of Idaho. It was composed by Albert J. Tomkins, McKinley Helm and Sallie Hume Douglas.

The Idaho state flag depicts the state seal on a blue background under which are the words ‘State of Idaho’ in gold on a red band. The flag was adopted by the legislature in 1907. The state seal was designed by Emma Edwards Green and is the only state seal in the United States which has been designed by a woman.

The mountain bluebird was chosen as the state bird by the General Assembly in 1931.

In 1935, the western white pine was chosen by the General Assembly as the state tree.

The General Assembly chose the cutthroat trout to be the state fish in 1990.

In 1975, the appaloosa was chosen by the General Assembly to be the state horse.

The monarch butterfly was chosen by the General Assembly in 1992 to be the state insect.

In 2004, the peregrine falcon was chosen by the General Assembly to be the state raptor.

The Hagerman horse fossil was named as state fossil in 1988 by the General Assembly.

The star garnet was designated as the state mineral by the General Assembly in 1967.

In 1931, syringa was chosen as the official state flower. It comes from a bush for which Native Americans found many uses, in fact, soap has been known to have been made from its bark and leaves.

What did your children enjoy learning the most about the state of Idaho?