Leonardo da Vinci lived a very colorful and fascinating life. This Leonardo da Vinci Unit Study will help your children understand who he was and all that he accomplished throughout his life. 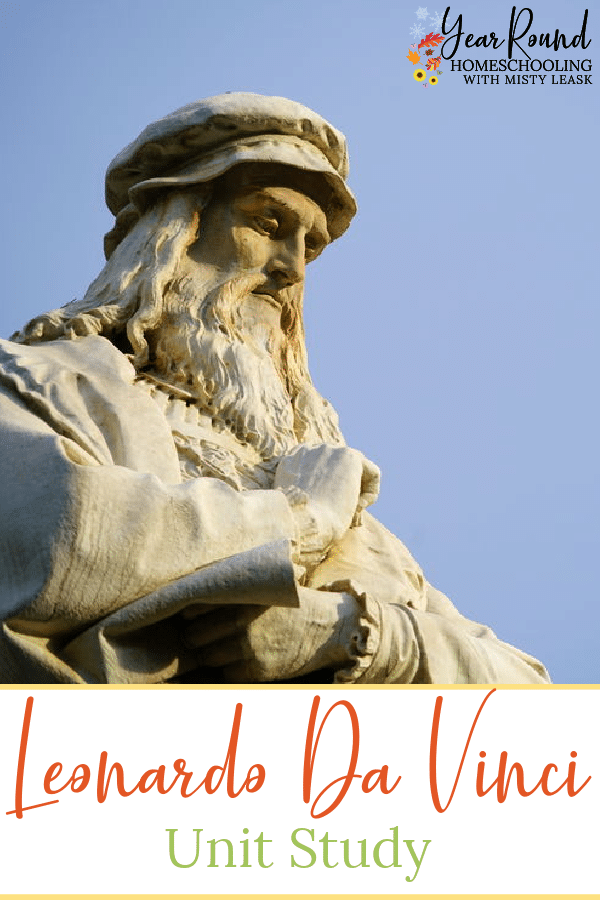 When someone mentions Leonardo da Vinci, our mind probably automatically thinks of The Last Supper or the Mona Lisa. However, Leonardo da Vinci was much, much more than simply an artist of the High Renaissance period.

Leonardo da Vinci was born on April 15, 1452, in a small hamlet near Anchiano which is in Tuscany, Italy. He was the illegitimate child of an attorney and notary, Ser Piero and village girl, Catarina. Leonardo lived in Anchiano with his mother until he was five at which age, he was sent to live with his father’s family in the town of Vinci where his uncle also lived and aided in caring for him.

In Vinci, he received a formal education however, he didn’t apply himself much to Latin or advanced mathematics until much later in life.  Not much is known of his childhood other than the fact that he was impressed and drawn by unusual and strange events that took place around him. These events sometimes inspired him and even found their way into his paintings and drawings.

Leonardo showed an affinity for art early on in his life and when he was 15 years old his father, because of his position in the town, was able to hire him out to the highly renowned Andrea del Verrocchio as a studio boy. Verrocchio was the official sculptor for the Medici family, the rulers of Italy at that time. Verrocchio accepted Leonardo as an apprentice two years later and for the next 7 years taught him much more than simply painting.

As Verrocchio’s apprentice, Leonardo learned a wide spectrum of the arts of that time from drafting, sculpting, and goldsmithing to leatherworking, mechanics, and much more. Leonardo joined the Guild of St. Luke in Florence when he was twenty years old. His father, Ser Piero, set him up with a workshop in Florence, but Leonardo stayed on for two more years working and collaborating with Verrocchio.

In 1478 at the age of 26, Leonardo da Vinci received his first independent commission, an altar painting from St. Bernard Chapel and the Adoration of the Maji from San Donato, neither of which were completed. The very next year he moved to Milan to work for Duke Ludovico Sforza as his painter and engineer.

Leonardo da Vinci remained in Milan for 17 years working for the duke. While there, he developed his “sfumato” technique (which in Italian literally means evaporated or vanished). This technique blends the edges of objects into the background giving them the sort of smoky blended effect that Da Vinci is so well known for.

He was also often consulted in various other fields such as agriculture, and military matters and served as their hydraulics and mechanical engineer for the entire duration of his stay. Da Vinci escaped back to Florence when Milan was invaded and taken over by the French.

After his return to Florence, it seems that Leonardo spent this period in his life working more in mechanics and engineering than painting. He served as an architectural expert on a committee that was investigating the damages to the church of San Francesco al Monte. In 1502, he traveled for 10 months in the service of the papal army as a senior military architect and general engineer. As he traveled, he surveyed territories sketched city plans, and drew up topographical maps.

A year later, he did some survey work for the city of Florence trying to divert the Arno River, but the plans to divert the river proved impossible and were abandoned. During this year he was also commissioned to paint a massive mural, Battle of Anghiari for the council hall in Florence twice the size of the Last Supper.  For three years he worked on the mural. These years were also dedicated to scientific discovery for Da Vinci. He did dissections at the hospital to study the human organism, studied the flight of birds, broadened his studies on hydraulics and the movement of water.

The French governor in Milan, Charles d’Amboise asked the Signoria if Da Vinci could come and work for him in Milan, in 1506. They agreed and because of this move, the Battle of Anghiari was never completed.

During his second stay in Milan, Leonardo’s patrons, Charles d’Amrosie and King Louis XII relied on his technical advice in many architectural matters. He did little painting, and this period depicts his interest in how things work and are put together.

He was commissioned to sculpt a very elaborate tomb for a Frenchman of which many sketches still exist, but these ideas were eventually abandoned when the French were driven from Milan. His studies in anatomy and science also continued. He made plans for a human flying machine and created several sketches of weapon inventions.

Because of the political unrest in Milan, Leonardo moved to Rome where the brother of the new pope gave him lodging and a monthly stipend. Here he dabbled in various artistic, architectural, and scientific projects but after 3 years, when the French yet again took over Milan, Leonardo at the age of 65 moved for the last time.

He left Italy for France at the invitation of King Frances I to become “chief painter, architect and engineer to the king”. He moved to a small residence in Cloux, France where he lived out the last 3 years of his life painting, sketching, and studying at will. Leonardo da Vinci died on May 2, 1519, at the age of 67.

The Last Supper was commissioned by Ludovico Sforza and was painted as a mural on the wall of the Convent of St. Maria delle Grazie. Because of his experimental sfumato technique, he used oil paints instead of fresco on the mural which caused the painting to deteriorate and flake quite soon after it was painted. The Last Supper we see today is in large part a restoration of Leonardo’s original work.

It is unknown who commissioned the painting of the Mona Lisa and who the woman in the painting is, but we do know that it was also painted during Da Vinci’s first period in Milan. The detail and skillful technique displayed in this painting has earned it the title of the most famous painting in the world!

During his first year in Milan Leonardo da Vinci was commissioned for a painting by the Confraternity of the Immaculate Conception and was originally painted on wooden panels and later transferred to canvas. There are two versions of this painting. Because of a dispute over the commission, Leonardo later painted a second version.

This particular piece of artwork is a drawing in silverpoint on paper. Because of the angle of the head and how the woman is looking down, some think it may have been a preliminary sketch of the Madonna in the painting, The Virgin of the Rocks.

This sketch of the ideal man whose proportions can fit in a square and circle was sketched by Da Vinci during his first stay in Milan and kept in his notebook for reference all throughout his later years. The idea was taken by him from the works of the Roman Vitruvius and showed Leonardo’s ability to combine art, mathematics, and the sciences.

Since it is said that as a child Leonardo was extremely impressed by caves that he visited and even believed that monsters lived in them; mountains, cliffs and caves made their ways into much of his artwork. While watching this virtual gallery, try to see how many pieces of his artwork you can find in which he painted or drew mountains, cliffs or caves.

It is generally believed that Leonardo da Vinci invented the sfumato technique or what we call today, soft edges. This video explains 5 ways of painting soft edges. Your child may want to get out some paints and try their hand at learning to paint soft edges.

Leonardo was a hydraulics engineer in Milan. If your child is not sure what hydraulics means, the first video below can help explain it to them.

After watching the first video and learning about hydraulics, then you can make a hydraulic crane together as an experiment.

Leonardo moved around quite a bit during his lifetime. For a geographical lesson, have your children label on this map where he was born in green, where he grew up and studied in light blue, his first Milan period in yellow, where he lived when he fled Milan because of a French invasion in pink (now you should have Florence colored in purple), His second period in Milan in blue (now you should have Milan colored in green). Color his period in Rome in yellow and draw a yellow line outside of Italy where France should be to depict his time in France and where he died.

Since Leonardo da Vinci lived during the High Renaissance period. It might be a good idea to refresh your knowledge of that historical period.

After watching the video below, have your child notebook what they’ve learned. Great alternatives to notebooking can be creating an informative poster, drawing a comic strip, creating a short video or PowerPoint presentation.

Since Leonardo da Vinci was from Italy, your child might want to try their hand at making an Italian snack. Try this easy 7-minute Bruschetta recipe that is kid-friendly.