The Moon is the most recognized object in our night sky. It is beautiful and provides light in the midst of utter darkness. This Moon unit study will teach your children about the Moon in fun and educational ways. 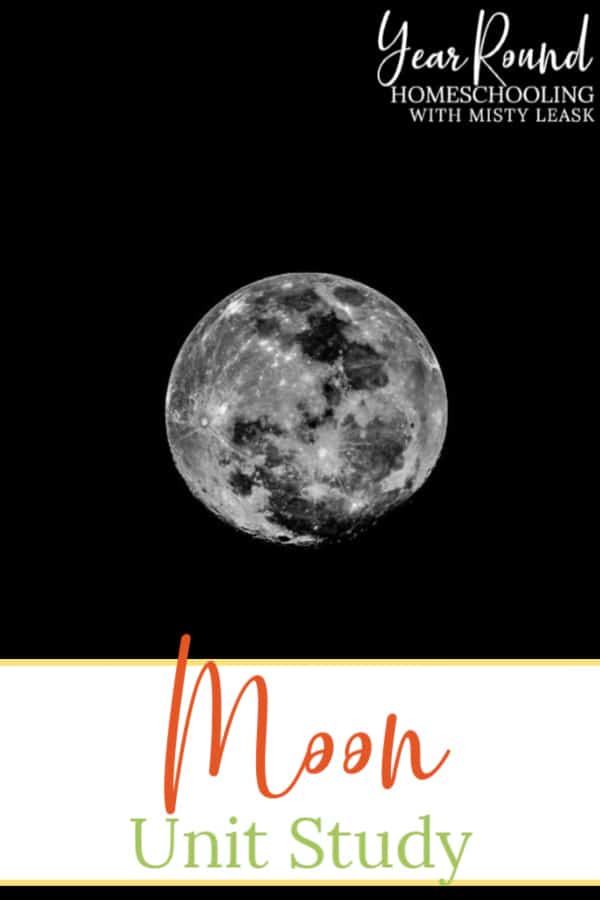 At one point, we used to name specific family members rather than ‘my entire family’, but as Aunts, Uncles and Cousins grew, it became harder to name everyone. Living far away from family can be extremely challenging, but this simple song made everyone feel just a little bit closer.

The Moon is pretty far away, even though it is the Earth’s nightlight. Perhaps, this Moon unit study will make it feel a little closer to home and a bit more special to your kids.

The Earth’s Moon is the only place in the solar system that human life has been outside of our planet. Man’s first visit to the Moon happened on July 20, 1969, when Neil Armstrong and Buzz Aldrin visited.

The moon is important to life on Earth because it balances our planet on its axis. It is also the reason that we have tides on Earth. Without the Moon’s exact place in the solar system, planet Earth would be off its rocker and tides wouldn’t happen.

While we have already visited the Moon, there are currently a few spacecraft exploring the brightest and largest object in our night sky. In total, the Moon has been visited by 24 people, 12 moonwalkers and 100+ robots over the years.

The Moon is a terrestrial body like Venus, Earth, Mercury and Mars. To be “terrestrial” it means that the Moon and these planets are mostly made of rock and metal.

While all the planets in our solar system have interesting names, the Moon is just that, the Moon. Our moon doesn’t have a specific name because when it was discovered by Galileo Galilei, it was thought to be the only moon in the solar system.

Since we have discovered other moons in the Galaxy, it is important to capitalize Moon when speaking of the Earth’s satellite to differentiate which moon you are referencing.

Our Moon is the 5th largest moon in the solar system.

The diameter of the Moon is found by multiplying its radius by 2. Which means the Moon’s diameter is 2,159.2 miles.

The volume of the Moon is 21.9 billion cubic km, which is equal to approximately 2% of the Earth’s volume.

The Moon’s density is a rather low one at 3.3 g/cm3, making it the 2nd densest moon in the solar system.

The location of the Moon is always next to the Earth, which is the 3rd planet from the Sun.

The Moon is 150 million km from the Sun on average.

You could place 30 Earths between the Earth and the Moon! It is on average 238,855 miles away from Earth.

The Moon has 3 layers; a core, a mantle and a crust.

The inner core is made of solid iron and is 149 miles in radius. It is covered by a liquid iron shell that is 56 miles thick, followed by a 93-mile thick partially molten layer.

The mantle begins where the Moon’s partially molten layer ends to the bottom of its crust. It is likely to be made of minerals like pyroxene and olivine.

The Moon’s crust differs in thickness based on which side you are on. The near-side of the Moon’s hemisphere has a thickness of about 43 miles while the far-side of the Moon is 93 miles thickness. The crust of the Moons is made of silicon, iron, magnesium, oxygen, calcium and aluminum, with small amounts of thorium, titanium, uranium, potassium and hydrogen.

The Moon orbits around the Earth as approximately 2,288 miles per hour!

The Moon’s atmosphere is called an exosphere and it is fragile and weak. Due to the fact that the exosphere is thin and weak, it doesn’t provide any protection from the radiation of the Sun or impacts from meteoroids.

There are 8 different phases of the moon; new moon, waxing crescent, first quarter, waxing gibbous, full moon, waning gibbous, third quarter and waning crescent. A full cycle of the moon’s phases happens every 29.6 days or once a month.

What Exactly is the Moon?

All About the Moon

Last Man on the Moon

The Moon is Always Round

How to Draw Moon Shadows

How to Draw the Moon

Phases of the Moon

Doodle on the Moon

Surface of the Moon

M is for Moon

Learning about the Moon opens up a whole new world — a place beyond our home that man has stepped foot onto. You just might see or hear new dreams your kids have after completing this unit study!

What did your kids enjoy learning the most through your Moon unit study?

Close Menu
×
59
To help personalize content, measure adverts and provide a safer experience, we use cookies. By giving consent, you agree to allow us to collect information through cookies.OkNoRead more