Earth. Home. What do your children know about the planet Earth? There is so much to learn about ‘The Blue Planet’ and this Earth unit study is a great place to get started! 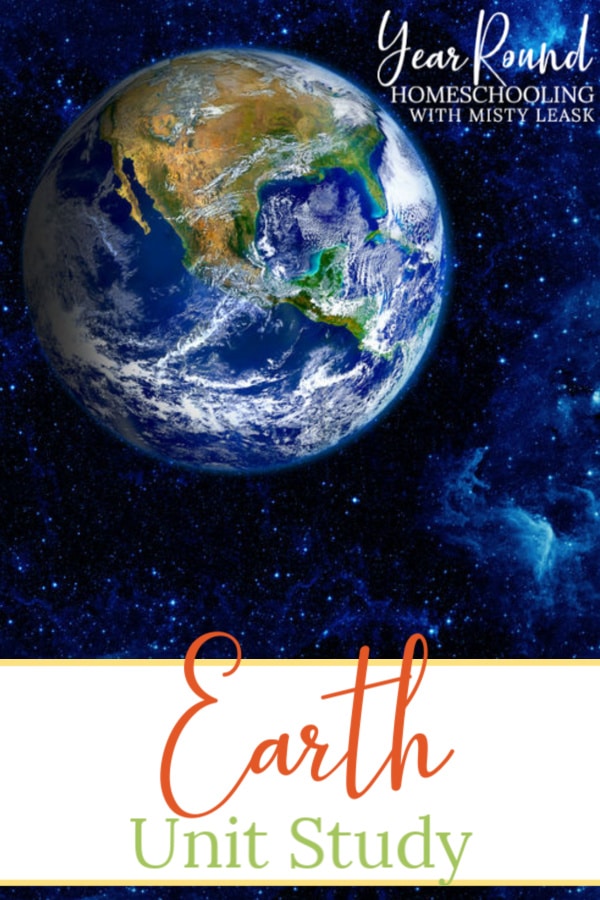 Learning about the place we call home is an important part of your homeschool science lessons. Whether you’re completing an entire solar system study, celebrating Earth Day or following child-led interest, an Earth unit study can be a lot of fun!

Fun fact — Eartha, the world’s largest globe is located in Maine. When my children were in elementary school, we went on a field trip to see it.

Our home, the Earth, is a unique planet in the solar system. It is the only one that has the ability to be inhabited by living things. Earth is also the only planet with liquid water on the surface. Nearly 70% of Earth’s surface is covered by its oceans, which contain 97% of the water on the planet.

The Earth’s shape is not actually round, instead, it is really an “oblate spheroid”. Its shape is due to the gravity pull on the planet.

Earth is the only planet in the solar system that has only one moon.

The name of our planet, Earth, is actually a Germanic word that means, ‘the ground’. The Earth has a few different nicknames including; ‘The Blue Planet’, ‘The World’ and ‘Terra’.

Earth is the 5th largest planet in the solar system.

Our planet’s equatorial radius is 3,959 miles. The polar radius of the Earth is 3,949 miles. The reason that Earth has two different radiuses is because the rotation of the planet causes it to bulge at the equator.

The Earth’s mass is approximately 6.6 sextillion tons, making it the 4th largest planet according to its mass size. Mass is measured by how much matter an object has within it. Be sure not to confuse mass with weight. Mass is how heavy something is without gravity. The difference between weight and mass is that weight is determined by the pull of gravity on an object.

The volume of the Earth is 260 billion cubic miles. Finding the volume of Earth is a bit more complicated than figuring its diameter or mass. To find Earth’s volume you’ll need this mathematical formula and the radius of the Earth.

Earth has a surface area of 197 million square miles. The surface area is defined as determining what number of square units will exactly cover the surface of a sphere. You’ll need this formula to determine the Earth’s surface area, (or any sphere) on your own.

The Earth’s density is 5.51 g/cm³ making it the densest planet in our solar system. Utilize this formula to calculate the density of any planet yourself.

The only planet with a single moon is our home, Earth. It is the brightest and most recognized object in our night sky. The moon gives Earth the stability it needs to keep from rocking. While our moon may seem close to us, it is approximately 238,855 miles away.

Earth is the 3rd planet from the sun.

It takes 8.37 minutes for light from the sun to reach Earth. Being the third planet from the sun, that means if someone were on Mercury or Venus they would see the sunrise before we would.

The inner core is approximately 759 miles in radius and is made of iron and nickel metals. Temperatures inside the inner core can reach up to 9,800 degrees Fahrenheit.

The next layer is the outer core which made up of the fluids of iron and nickel. This layer of the Earth has a thickness of 1,400 miles! However, the mantle is Earth’s thickest layer at 1,800 miles of hot, molten rock.

The crust is about 19 miles deep on average, until you’re on the ocean bottom where it the crust is only about 3 miles from the sea floor to the mantle.

The Earth travels at a speed of 30 kilometers per second around the sun. That means that we travel approximately 1.6 million miles a day and 584 million miles per year!

It takes 365.26 days for planet Earth to complete an orbit around the sun. Since it takes an extra quarter of a day to orbit the sun, we add an extra day to our calendar year every 4 years. The average velocity that Earth travels through its orbit is 18.5 miles per second.

A complete axis rotation for the Earth takes 23.934 hours. This rotation is what gives us day and night.

The Earth’s atmosphere is roughly composed of 78% nitrogen, 21% oxygen, 0.97% argon and carbon dioxide and approximately 0.04% other gases and water vapor. This particular mixture of gases is what we call air. There are actually 6 layers to the atmosphere of Earth; troposphere, stratosphere, mesosphere, thermosphere, exosphere, and ionosphere.

The Earth’s ‘axis’ which is an imaginary line is tilted 23.4 degrees straight through the middle from the North Pole to the South Pole. Different parts of our planet are then tilted towards the sun at different times of the year, giving us four seasons.

The Earth Our Home

How Old is the Earth?

Liquid Water and the Earth

How to Draw Planet Earth

Layers of the Earth Bowl

Earth is an amazing planet. By completing a unit study of our home, your children will have had the opportunity to experience what they’re learning!

What did your kids enjoy learning the most through your Earth unit study?

Close Menu
×
80
To help personalize content, measure adverts and provide a safer experience, we use cookies. By giving consent, you agree to allow us to collect information through cookies.OkNoRead more