Rings, moons and a giant spot are just a few things that your kids will learn about by completing a Jupiter Unit Study. 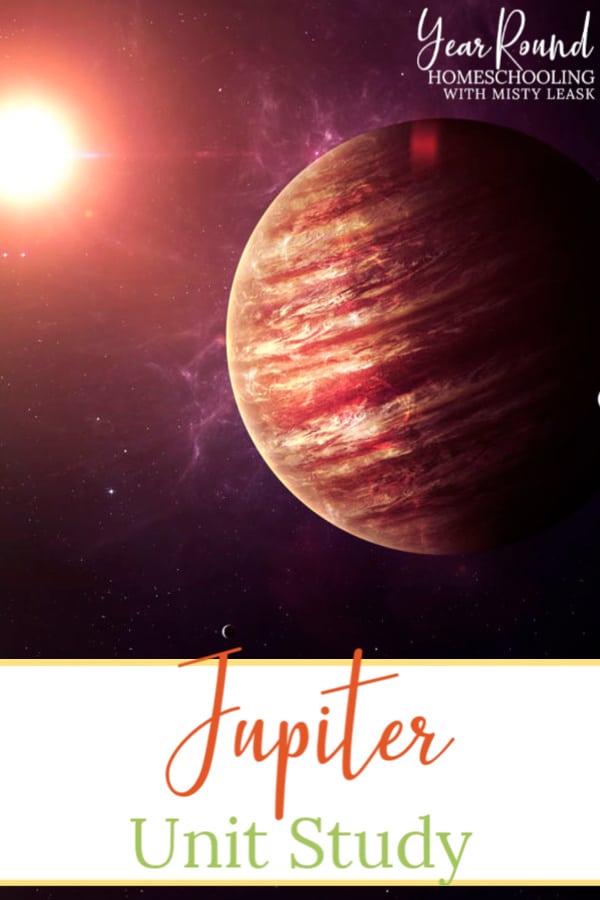 Jupiter is one of five planets in our Solar System that can be seen with the naked eye. Using a guide can help you identify the bright lights you see in the night sky.

Our Solar System is simply awe-inspiring. The more you dig into outer space, the more you’re abundantly aware of the majesty of the Creator!

The planet Jupiter is most known for its Giant Red Spot. It actually isn’t a spot, it is a giant storm that is larger than Earth in size that has been raging for years.

Jupiter is the 4th brightest object in our night sky. Its auroras are the brightest, but they can only be seen through ultraviolet. While the planet is similar to a star, it isn’t large enough to burn like a star.

Earth and Mars are terrestrial planets, but like Saturn, Jupiter is a gas giant.

Jupiter’s powerful gravity pulls more comets and asteroids to itself than any other planet in the solar system.

The planet Jupiter was named after the supreme Roman god, which was also known as Zeus to the Greeks.

Jupiter is the largest planet in our solar system. It is 318 times larger than Earth!

Jupiter is undeniably the most massive planet in our solar system at 1,898,000,000,000 trillion metric tons. It is 2.5 times more massive than all the other planets combined!

Jupiter’s surface area is 23,713,907,537 square miles. To define the surface area of a sphere you’ll need to determine the number of square units that will exactly cover the surface.

The density of Jupiter is 1.326 g/cm3  making it the second-most dense of the gas giants.

Like Saturn, Jupiter does have rings. However, they are faint and made of dust not ice unlike Saturn’s. There are 3 ring systems around Jupiter and they can only be seen when sunlight is behind them.

The planet Jupiter has more than 50 confirmed moons, with more than 20 waiting to be confirmed with names. The planet’s four largest moons are Callisto, Europa, Ganymede and Io. Galileo Galilei first discovered these moons by telescope in 1610, so it is no surprise that they are known as Galilean moons or Galilean satellites.

Jupiter is the 5th planet from the Sun.

It takes light from the Sun 43.2 minutes to reach the planet Jupiter.

The core of Jupiter is metal, iron and silicate minerals, in either solid or liquid form. This core is believed to be as large as the planet Earth.

The temperature found in the clouds of Jupiter is around -243 Fahrenheit, while the core of the planet could see temperatures up to 90,032 degrees Fahrenheit.

The axis rotation or length of a day on Jupiter is only 10 hours long.

Jupiter’s atmosphere is made up of 90% hydrogen and 10% helium. It is the largest atmosphere in the solar system. There are likely 3 layers of clouds in the atmosphere on Jupiter that span approximately 44 miles. The different colors of clouds vary; blue, white, brown and red; all of which are based on their altitude. Due to the speed at which Jupiter spins, these clouds are separated by a jet stream into what we see as stripes and swirls on the planet.

How to Draw Jupiter

How to Make a Jupiter Planet Model

What did your kids enjoy learning the most through your Jupiter unit study?