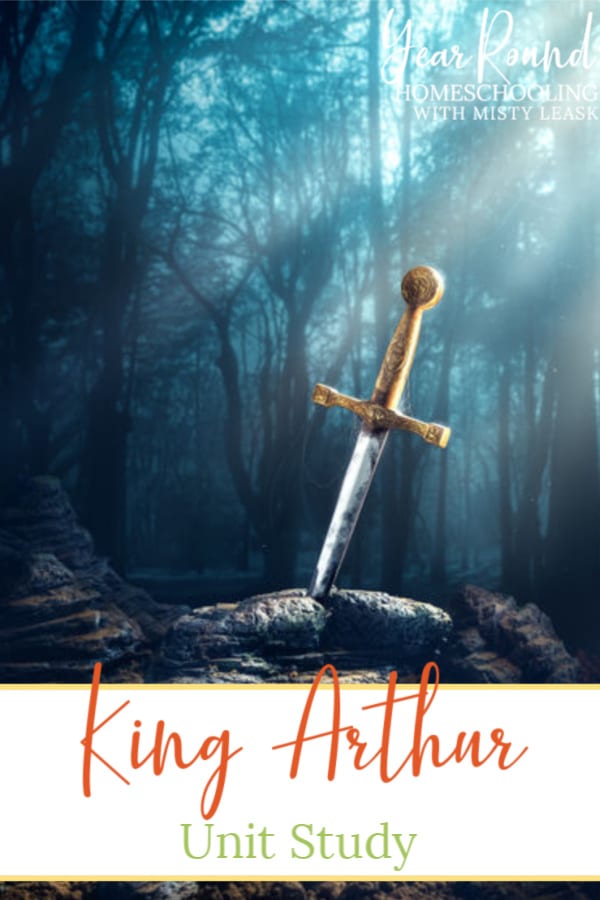 Growing up, I never read the story of King Arthur and the Knights of the Round Table. While I loved to read, this was not a book that interested me.

My mom and I loved to watch the movie, First Knight, together though. Thinking back over the movie now, I realize just how much King Arthur loved Lady Guinevere.

Isn’t that what love should be like? Willing to overlook flaws and forgive because we know we have flaws of our own that are in need of forgiveness?

The story of King Arthur, Lady Guinevere and the Knights of the Round Table is one that children of all ages can enjoy and this unit study is a great place to start!

There are myriad of ways to enrich your child’s learning experience when studying the Middle Ages. Children are usually delighted to learn about knights, ladies and castles. Most children have already heard stories about Camelot, King Arthur, Lady Guinevere and the Knights of the Round Table; but let’s take a quick look at what history says about these legends.

Who is King Arthur?

Most historians will tell you that King Arthur is simply a legend; a story passed down through generations in various stories, and poems. He is said to have been a British king that fought and defended the British against the Saxons during the end of the 5th century and beginning of the 6th century.

He is first mentioned, in a historical account of 12 battles lead by King Arthur against the Saxons. These accounts were written by a Welsh historian, Nennius. However, they were all taken from Welsh poetry.

Later, in 1138, a man named Geoffery of Monmouth published a book called the Historia Regum Britanniae (History of the Kings of Britain). One of the central figures of this book is King Arthur and his battles against the great and sometimes magical enemies of Britain.

There is no way of really knowing how much truth there is to any of the stories in Nennius’ or Geoffrey’s books. It is important to know that King Arthur is not mentioned in the only source of the Saxon invasion that we have today.

Who was Lady Guinevere?

Lady Guinevere was King Arthur’s wife. The very earliest account of her is found in Geoffery of Monmouth’s book from 1138.

She was described as the greatest beauty in Britain, a descendant of a noble Roman family, and educated by the Duke of Cornwall.  In Geoffery’s, Historia, she is said to have fallen in love with King Arthur’s nephew and married him while Arthur is off to war.

Later accounts of Lady Guinevere went into more detail. They have her falling in love with King Arthur’s most trusted knight, Lancelot, which in the end divides and destroys the Knights of the Round Table.

However, yet another group of legends shows Guinevere as a loyal wife to King Arthur. When he is off to war and his nephew wants to force her to marry him, she locks herself in the Tower of London to escape him.

Who were the Knights of the Round Table?

The Knights of the Round Table is a part of the Arthurian legend that was added on in 1155 by a French author. These knights were the best that King Arthur had and they were given the task of keeping peace in the kingdom and leading the quest for the Holy Grail.

King Arthur and Knights of the Round Table

Who was King Arthur and Where was Camelot?

King Arthur: ‘Once and Future King’

The Pre-Raphaelite Paintings of King Arthur, the Arthurian Legends, and the Lady of Shalott

Sword in the Stone Game

King Arthur and Knights of the Round Table Math Game

Character Lessons from the Honor of a King

Much can be learned from studying the legend of King Arthur. Along with the fun of knights, swords, castles and drawbridges; children can learn about the importance of equality, trust, and loyalty and how deception and broken promises can destroy a community.

The story of King Arthur and the Knights of the Round Table may be fictitious; however, these qualities are timeless and as relevant today as they were back in the Middle Ages.

What is your favorite resource for completing a study on King Arthur?

Close Menu
×
8
13
To help personalize content, measure adverts and provide a safer experience, we use cookies. By giving consent, you agree to allow us to collect information through cookies.OkNoRead more