Have you or your kids ever thought about visiting Mars? While it isn’t possible yet, you can learn all about ‘The Red Planet’ through this fun Mars Unit Study! 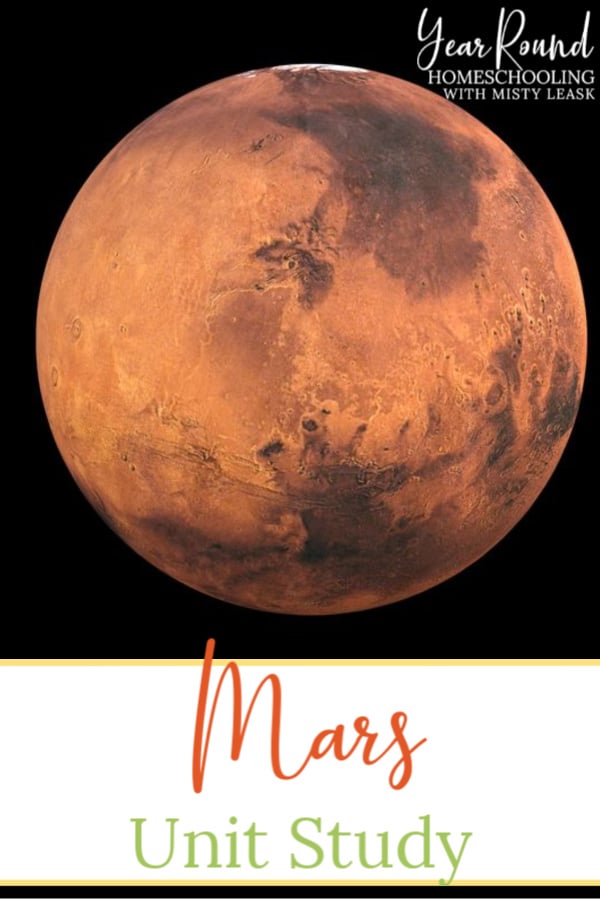 Traveling to Mars is something that many have dreamed of doing — including my husband and stepson. It was one of their most talked-about things when I first met them.

Personally, I don’t love to fly, so I am happy looking at the videos and pictures on my computer. I am in awe of the universe that God created and even more so the more I learn about it.

One of the most explored plants in our solar system is Mars. Over the years, there have been several spacecraft, rovers and landers exploring the atmosphere and planet itself.

The color of Mars is due to the presence of rusty iron on the surface of the planet.

It isn’t surprising that Mars and Earth have many similarities being next-door neighbors in the solar system.

Olympus Mons, the largest mountain in the solar system is found on Mars. It is three times larger than Mt. Everest on Earth.

There is also a range of canyons on Mars that stretch over 2 miles long and is nearly 4 miles deep! For comparison, the Grand Canyon on Earth is only 1 mile deep!

“The Red Planet” was named after the Roman god of war because of the resemblance of blood in the planet’s color.

Mars is the 3rd largest terrestrial planet and the 7th largest planet in the solar system.

The radius of Mars is 2,106.1 miles. You can easily figure out the radius of any planet using the distance from the center to the edge of the planet.

Once you know the radius of a planet you can find its diameter easily. Simply take the radius and multiply it times two. In doing so, you’ll find that Mars’ diameter is 4,212.2 miles.

At 642,000,000 trillion metric tons, Mars is the 2nd smallest planet when measured by mass. Mass is measured by how much matter an object has within it. Be sure not to confuse mass with weight.

The density of Mars is 3.93 g/cm³ making it less dense than Earth. This would indicate that Mars’ core contains lighter elements.

Mars has two small moons, Phobos and Deimos, both of which were named after the horses that pulled the Greek god, Ares’ chariot.

Mars is the 4th planet from the Sun and the outermost terrestrial planet in the solar system.

It takes 12.6 minutes for light from the Sun to reach the planet Mars. Since Mars’ is the neighboring planet to Earth, we would see the sunrise before someone on Mars would.

The planet Mars has three layers. Its core is dense and made of iron, nickel and sulfur. Just outside the Mars’ core is a rocky mantle that can be up to 1,170 miles thick! The top layer of Mars is its crust. The crust contains iron, magnesium, aluminum, calcium and potassium and ranges from 6 to 30 miles in depth.

It takes nearly 2 years on Earth for Mars to orbit the Sun! Mars completes an orbit around the Sun in 687 Earth days.

The complete rotation of Mars on its axis takes 24.6 hours.

Mars’ thin atmosphere contains mostly carbon dioxide, nitrogen and argon gases. Due to the thinness of the atmosphere on Mars, heat from the sun escapes the planet rapidly. The sparseness of Mars’ atmosphere does not protect it well from impacts from various objects in space.

Curious About Life on Mars?

Mars – The Other Blue Planet

Your Weight on Mars

How to Draw Mars

Create 3D Glasses (for these 3D Mars Images — then create your own!)

What did your kids enjoy learning the most through your Mars unit study?