The farthest planet from the Sun is the coldest, right? Wrong. Teach your kids all about the 8th planet in the Solar System with this Neptune Unit Study. 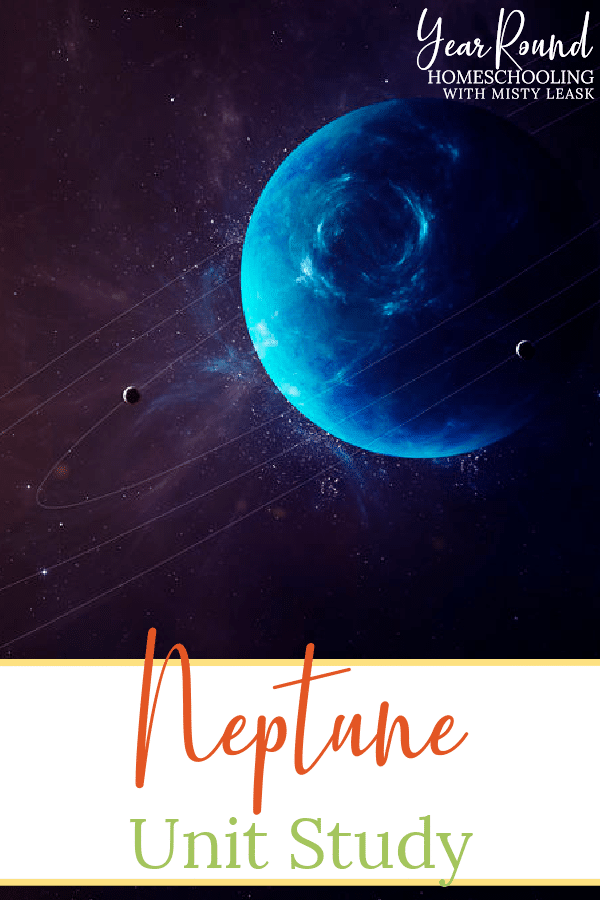 Science class in our homeschool involved a lot of outdoor time. We hiked and learned about trees, plants, flowers and animals. At night we laid out under the stars and studied the night sky.

We took pictures and drew sketches of everything we’d seen. Afterward, my kids would complete their studies by researching on their own.

The Solar System is by far one of my kids’ favorite science studies from their elementary school years. They made a model that hung from their bedroom ceiling for years.

Making science a subject that your kids can experience is key to them enjoying and remembering it.

The only planet that is not visible to the naked eye is Neptune. It is also the first planet that was actually predicted by mathematics.

With it being the farthest planet from the Sun, you would think it would be the coldest, but it isn’t. However, it does make for crazy seasons. Each of the 4 seasons lasts 40 years on Neptune!

Neptune is the windiest planet in our Solar System with winds reaching up to 1,200 miles per hour!

The planet Neptune is named after the Roman god of the sea.

Neptune is the 4th largest planet in our solar system.

The radius of Neptune is 15,299.4 miles, making about 4 times wider than our home planet, Earth! To find the radius of a planet you need the distance from the center to the edge of the planet. You can figure out the radius if you know the circumference, diameter or area using these formulas.

In order to find the diameter of Neptune, you’ll need to take the radius and multiply it times 2. In doing so, you’ll find that Neptune’s diameter is 30,598.8 miles.

At 1.02 x 1026, Neptune is 17.1 times more massive than Earth. Be sure not to confuse mass with weight. The difference between weight and mass is that weight is determined by the pull of gravity on an object.

The volume of Neptune is 15,000,714,125,712 miles3. The measure of volume determines how much space a three-dimensional object such as a planet occupies. To find Neptune’s volume on your own you’ll need this mathematical formula, V = 4/3 pi x r^3,  and the radius of the planet.

The density of Neptune is 1.64 g/cm³. You can convert the density of Uranus to lbs/gallons using this conversion tool.

Neptune has two sets of rings; 5 main rings and 4 ring arcs, for a total of 9.

There are 14 known moons surrounding Neptune. The largest being, Triton, which is the only moon to circles its planet in the opposite direction of its rotation.

Neptune is the eighth and most distant planet from the sun.

Since planets are always moving, how far they are from the sun changes. However, on average Neptune is 2.8 billion miles away from the sun.

It takes 4 hours for light from the sun to reach Neptune.

Like Uranus, Neptune is an ice giant and is made up of “icy” materials including; water, methane and ammonia. It also has a small, rocky core which is about the same mass size of Earth.

While Neptune is the farthest planet from the Sun, it isn’t the coldest. The average surface temperature of Neptune is -353 degrees Fahrenheit.

It takes approximately 165 years on Earth for Neptune to complete one trip around the sun. 2011 is the first time Neptune has passed by Earth since the planet was discovered!

Neptune completes a full axis rotation in 16 hours, meaning one day on Neptune is only 16 hours long.

Neptune’s atmosphere is made up of hydrogen, helium and methane. Like Uranus, Neptune gets its blue color from the presence of methane in its atmosphere. However, it is a much brighter blue than Uranus, so there must be something else in the atmosphere.

How to Draw Neptune

What did your kids enjoy learning the most through your Neptune unit study?