What is Presidents’ Day?

It is important that we teach our children about Presidents’ Day as part of our homeschool history class. This Presidents’ Day history lesson is a great resource to kickstart the conversation surrounding the holiday. 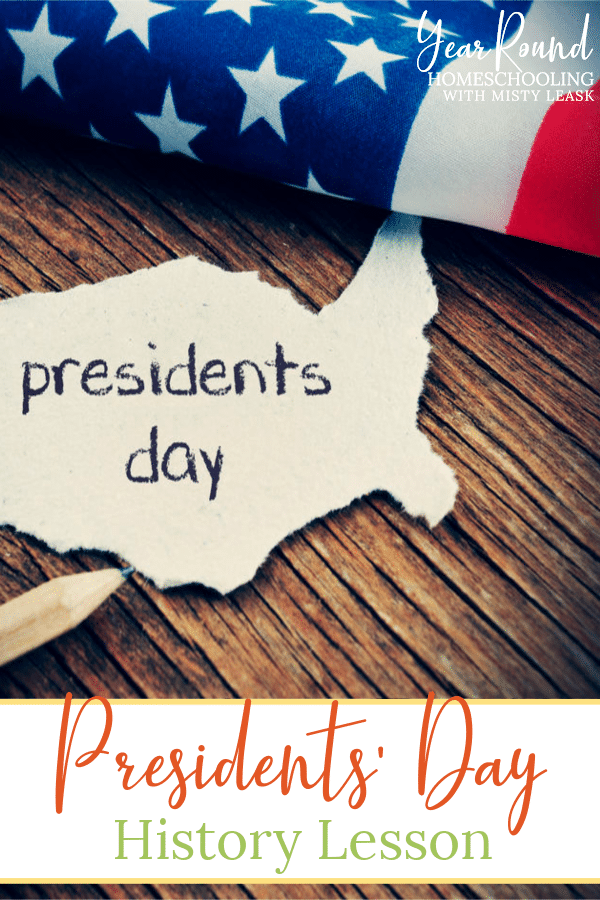 Presidents’ Day is a holiday on the third Monday in the month of February.

The Men We Remember on Presidents’ Day

George Washington was the first President of the United States of America and he was a very important man. Even before he became the President, he was the Commander of the Continental Army of the 13 Colonies of America.

Before 1776, the English ruled the land and collected taxes from the citizens for King George III. The people did not like being ruled by a king who lived across the ocean.

In 1776, the people declared themselves independent from England and fought in the Revolutionary War for their independence. General George Washington was the Commander of the Continental Army and led the American forces to victory after 8 long years of war.

After the war, the newly independent country had to create its own government. Instead of a king, they voted to elect a President who would be in charge of the government for 4 years at a time.

George Washington was elected for two terms as President from 1789 – 1797. While he was President, he tried to unite the people and encouraged cooperation among the North and the South who had different ideas about money, farming, taxes, and most importantly, slavery.

George Washington was a beloved man and important man, his birthday was remembered so that we can celebrate the contributions he made to our country.

In 1968, Congress decided to include Abraham Lincoln’s birthday in the official celebration of Presidents’ Day because he was also a very important President in the United States.

In general, people in the North were against slavery, and people in the South thought they needed slavery to work their farms and plantations.

President Lincoln was outspoken against slavery and when he won the election in 1860 to be the next President, the South was afraid he would make slavery illegal.

Before he could do that, they decided to leave the country in 1861. Several Southern states seceded from the United States and created the Confederate States of America. The North and South fought from 1861 – 1865 in the Civil War.

During the war, President Lincoln made two speeches that have helped to shape our nation today. He gave his Emancipation Proclamation to free slaves and the Gettysburg Address helped to rally the North to continue fighting against slavery.

On November 19, 1863, President Lincoln gave the Gettysburg Address at the dedication of a cemetery in Gettysburg, Virginia following a major battle there.

“Four score and seven years ago our fathers brought forth on this continent a new nation, conceived in Liberty, and dedicated to the proposition that all men are created equal.”

Lincoln went on to speak on the importance of working together to end slavery and making sure that the men who died in the battles of the war had not died for no reason and ended his speech as follows.

“…this nation, under God, shall have a new birth of freedom—and that government of the people, by the people, for the people, shall not perish from the earth.”

April 9, 1865, the South surrendered to the North and the United States was one country again. They began the long journey to reconstruct the North and South and to eliminate slavery.

Both Presidents Washington and Lincoln fought for unity and equality when our nation was young. They knew the importance of working together and making sure that everyone in our nation was treated fairly and equally.

Our lives and country would look a lot different without these men, so it is important that we remember them and everything they accomplished throughout their lives on Presidents’ Day.