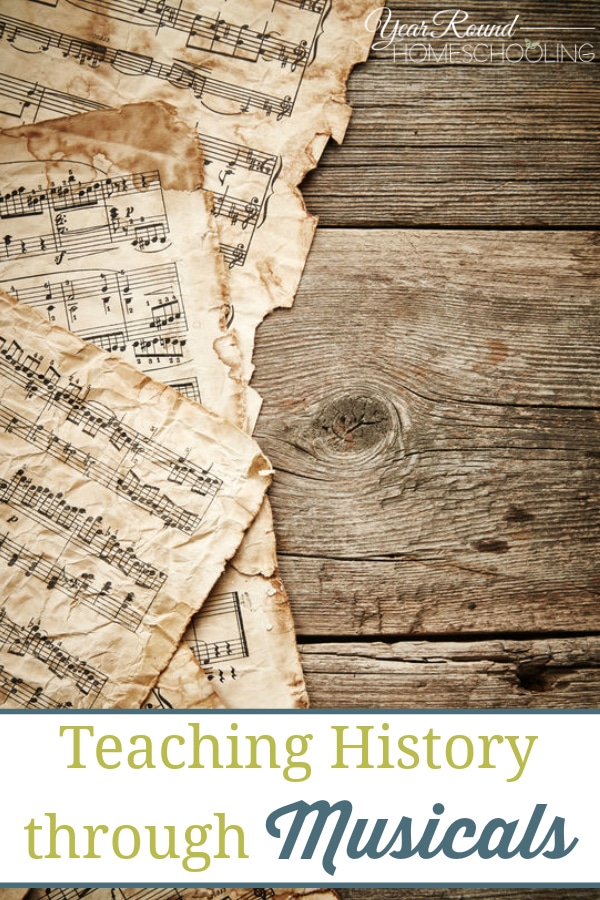 Beside the obvious study of the different genres of music, it may surprise you that many musicals have their basis in some historic events. There are a large number of topics that have been covered by musicals, from the pograms of Russia to the drafting of Elvis into the army.

How to Teach History Through Musicals

Fiddler on the Roof

This is one of my favorite musicals. It focuses on a Jewish family with daughters. There are so many topics that could be taught through this movie.

Topics to Study from the musical, Fiddler on the Roof

As you can see, you can use a musical to spring board to a wealth of topics. I happen to really enjoy musicals, so, I could say one of my favorite many times. So, I will just leave it as the list that follows are musicals I enjoy.

This musical is set at a time when the state of Oklahoma was recently settled. There was literally a race for free land! Did you know that there were strained relationships between farmers and ranchers? There were also problems that arose due to the diverse purposes of the settlers at this time.

Topics to Study from the musical, Oklahoma

There was a time in our not so distant past when children were used and abused as part of the labor force. The Newsies focuses on a specific occurrence of this abuse.

Newspaper delivery sales were done primarily by children in the 19th century. Many were orphans, and it was their only livelihood. In July 1899, Pulitzer and Hearst proposed charging the children 1/10 of a cent more per paper.  That doesn’t sound like much to us now, but to those children it was literally their life on the line. There is so much to discover and learn about history through this musical!

Topics to Study from the musical, The Newsies

Oliver is movie based on the book by Charles Dickens and it addresses the topic of orphans as well. Many of Dickens’ writings were to bring awareness to society of the plight of the poor and orphans. This movie is set in England and follows the life of Oliver Twist, an orphan.

Topics to Study from the musical, Oliver

This movie is full of fun, laughter, music, dance and conflict. One of the consequences of our countries Manifest Destiny Policy is exhibited in this movie…a shortage of women.

Topics to Study from the musical, Seven Brides for Seven Brothers

Have you ever heard of the unsinkable Molly Brown? She was a famous lady in her day. Molly survived the St. Verain 100 year flood in Colorado as a child and the sinking of the Titanic as an adult!

Topics to Study from the musical, The Unsinkable Molly Brown

Elvis Presley starred in a number of musicals, but did you know that there was one based on a specific time in his life? Bye Bye Birdie is a musical comedy based on Elvis being drafted into the Army. His fans were frantic about him being in the Army.

Topics to Study from the musical, Bye Bye Birdie

West Side Story was the modern day adaptation of Romeo and Juliet of its time. Prejudice and feuds are boundless in time.

Topics to Study from the musical, West Side Story

Not all movies are all precise in their historic accuracy. They use artistic license, so as part of your studies make sure to compare and contrast the movie vs. historic fact. This will teach your children to ensure that they question what they read, watch and hear, teaching them to recognize fact vs. fiction.

It is my desire that this fosters your family movie night, musical enjoyment and piques your children’s interest in a diverse arena of topics. There are many more musicals that can be enjoyed and used as a platform to study history and other topics. Let this list be the start of an amazing journey of teaching history through musicals!

God’s blessings on your journey,