California is known for many things, the Gold Rush, Hollywood, Alcatraz, the Golden Gate Bridge and much more. Your kids will learn all about ‘The Golden State’ through this California State Study. 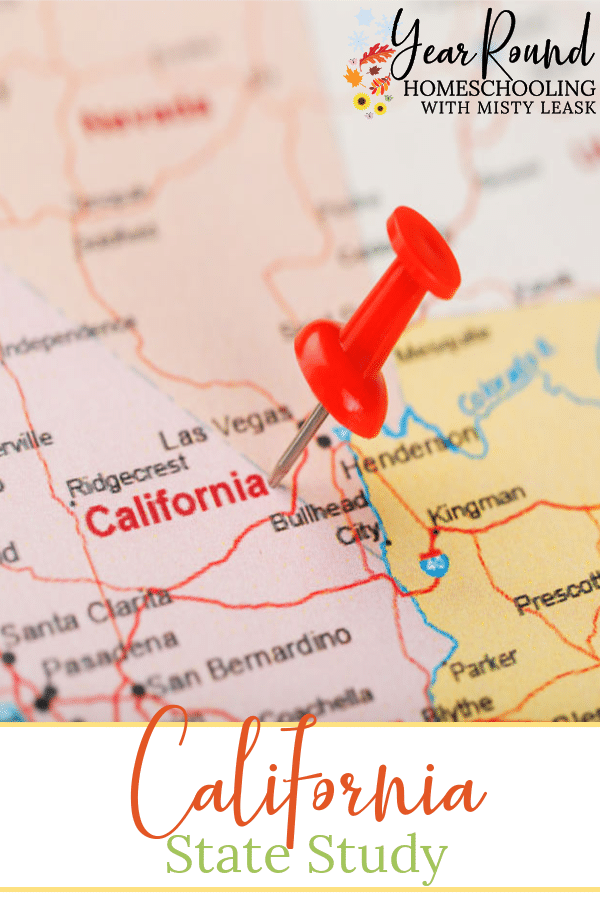 Whenever I think of California, I remember my first visit to the state when I was just 5 years old. My mom, brother and I were dropping my dad off at ‘A School’ for the U.S. Navy.

While we were there, we visited my dad’s sister and her family and saw the Redwoods at King’s Canyon. I’ve never forgotten the size of the Redwood trees.

Perhaps someday, I’ll be able to take my husband and kids to see them. That would be a fun family adventure!

I designed this California State Study to make learning about ‘The Golden State’, both a fun and educational experience. I’ve included videos, articles, literature options, state facts, famous landmarks and more to provide thorough learning opportunities for your children.

History of the State of California

The History of California

This Week in California History

California became the 31st state in the Union on September 9; 1850.

Eureka! This motto (Greek for, “I have found it”) was made official in 1963 and hails back to when gold was first discovered in California.

California was officially nicknamed ‘The Golden State’ in 1968. Many think this nickname came from the gold discovered there in 1848. However, it is also nicknamed for the golden fields of poppies that bloom in the spring, the golden sunsets on its beaches, and the Golden Gate Bridge.

I Love You, California was written by F.B. Silverwood and A.F. Frankenstein and was made the official state song of California in 1951.

The California state flag was designed by William Todd, the brother of Mary Todd Lincoln (the wife of Abraham Lincoln). The flag portrays a California grizzly bear (the California state animal) on a white background (which stands for purity) with a red star on the upper left- hand side of the flag (symbolic of sovereignty) and a red stripe going horizontally through the bottom of the flag (representing courage). The flag was first flown by Californian settlers in 1846 in opposition to Mexican rule and adopted in 1911 as the official Californian flag.

The California Quail was adopted as the state bird in 1931.

The California dog-faced butterfly became the state insect/butterfly in 1972.

In 1975, California made the grey whale the state marine mammal. It is also an endangered species.

The desert tortoise became the official California state reptile in 1972.

In 2016, Denim was chosen to be the California state fabric!

The California poppy became the official state flower in 1903.

The West Coast Swing Dance became the official state dance in 1988. While the Square Dance is the official folk dance.

What did your children enjoy learning the most about the state of California?

Close Menu
×
6
To help personalize content, measure adverts and provide a safer experience, we use cookies. By giving consent, you agree to allow us to collect information through cookies.OkNoRead more