Ready to start learning about the ‘Constitution State’? This Connecticut State Study is full of fun facts, resources and information covering all your kids need to know about the state of Connecticut. 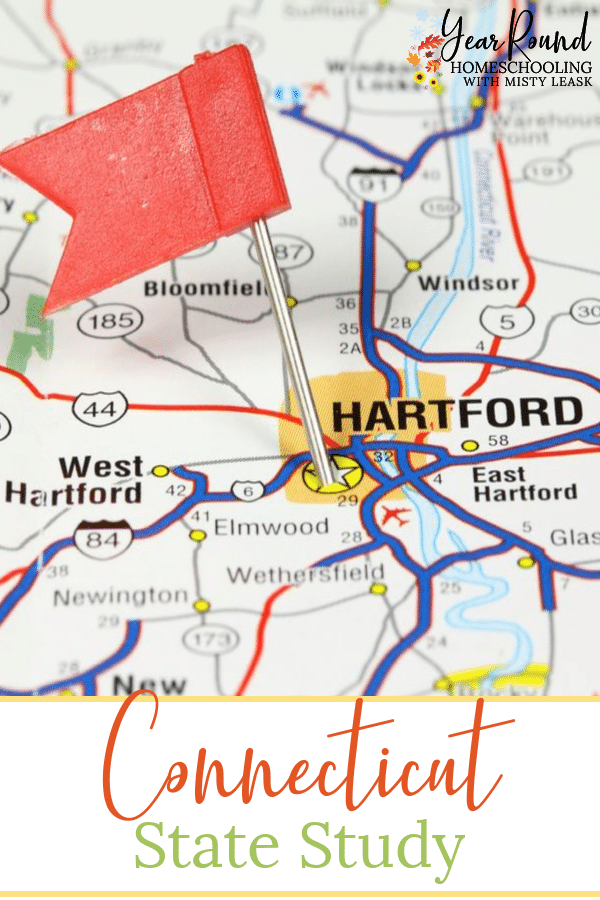 I spend a good portion of my childhood living in the state of Connecticut. My dad was in the Navy and my mom loves winter, so it was an easy duty station pick for my dad.

While my childhood memories aren’t in abundance, I do remember spending a lot of time outdoors in Connecticut. We did a lot of hiking, picnicking and exploring.

One of my favorite memories from Connecticut was spending the 4th of July at a park listening to the radio play music set to the fireworks. I haven’t had that experience anywhere else in my life. It was amazingly memorable.

I designed this Connecticut State Study to make learning about the ’Consitution State’, both a fun and educational experience. I’ve included videos, articles, literature options, state facts, famous landmarks and more to provide thorough learning opportunities for your children.

Connecticut was named after the Connecticut River which runs down the middle of the state. It is basically an Americanized spelling of the word Quononiquett which is Algonquian (Native American from that area) meaning, “Beside the long tidal river”.

Qui Transtulit Sustinet meaning, “He who transplanted still sustains”. The exact origin of the motto is unsure, however, it is believed that it was most likely derived from Psalms 80. “Thou hast brought a vine out of Egypt. Thou hast cast out the heathen and planted it.”

The Constitution State is the official nickname chosen by the General Assembly in 1959. Since the 19th century, it has been claimed by historians that Connecticut had the first ever written constitution in history dating back to 1638/39.

The composer of the song is unknown, but Yankee Doodle was chosen as the official state song of Connecticut on October 8, 1978.

The state flag of Connecticut features a coat of arms on a blue background. The flag is based on the colonial seal of Connecticut from 1711. It shows three grape vines that are said to represent the original 3 colonies, Connecticut, New Haven, and Saybrook that were “uprooted and replanted”, thus the scrolled motto below the sheild: Qui Transtulit Sustinet meaning “He who transplanted still sustains”.

The American Robin was chosen as the state bird by the General Assembly in 1943.

When King James II tried to revoke the Royal Charter giving Connecticut rights to govern itself, the charter was hidden in a hollow space in a white oak tree. This tree was labeled “The Charter Tree” and when it fell in a storm in 1856 pieces of its wood became treasures to many. Three chairs were crafted from its trunk; one of which is the seat of the president of the State Senate. In 1947, the white oak was chosen by the General Assembly as the state tree.

The General Assembly chose the Eastern Oyster to be the state shellfish in 1989.

In 1975, the Sperm Whale was chosen by the General Assembly to be the state animal.

The European “Praying” Mantis was chosen by the General Assembly in 1977 to be the state insect.

The USS Nautilus was the world’s first nuclear-powered submarine and was built by Connecticut craftsmen. It was chosen in 1983 by the General Assembly to be the state ship. Since the ship is docked there and can be viewed by visitors it was also named a State Landmark.

Eubrontes was named the state fossil in 1991 by the General Assembly.

The Almandine Garnet was designated as the state mineral by the General Assembly in 1977.

In 1907, the Mountain Laurel was chosen as the official state flower. It is also known as Calico Bush or Spoonwood.

What did your children enjoy learning the most about the state of Connecticut?