Visit and learn all about ‘The Aloha State’ with your kids using this fun Hawaii State Study. 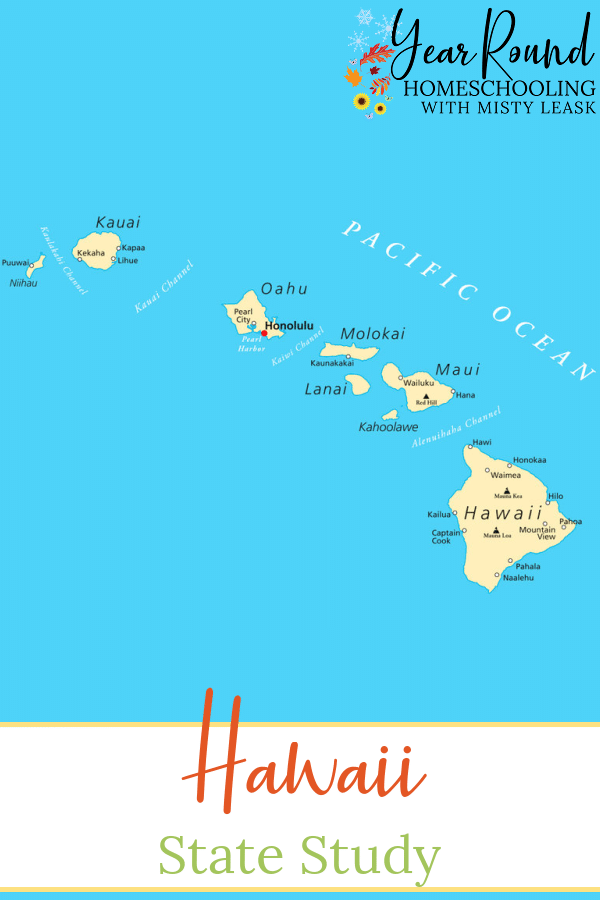 As a sun and sand lover, I’m quite certain I’d enjoy visiting Hawaii if we ever went there. As a Navy Brat, I would like to visit the Pearl Harbor National Memorial in Honolulu someday.

My stepson and husband have been talking about visiting Hawaii for a very long time. It has always been the expense that has kept us from making the trip as it has often been the most expensive destination we’ve looked into visiting.

So, while I haven’t had my toes in the sand in Hawaii or seen it firsthand, I did enjoy the research and virtual trips I made while working on this state study.

History of the State of Hawaii

The History of Hawaii

Hawaiians say that the name of Hawaii is derived from the mythological character “Hawaii’iloa” who is said to have first discovered and settled the islands, thus the islands are named for him.

Ua Mau ke Ea o ka ‘Aina I ka Pono- “The life of the land is perpetuated in righteousness” was adopted as the state motto in 1959.

The nickname, The Aloha State, was officially adopted on August 21, 1959.

Lyrics to the Song Hawaii Ponoi were written by King David Kalakaua and were put to music by Captain Henri Berger. This song was adopted as the state song in 1967.

The Hawaii state flag has eight horizontal alternating white, red and blue stripes with the Union Jack in its upper left-hand corner. The stripes symbolize its eight major islands, and the Union Jack symbolizes that it was at one time under the protection of Great Britain. It was officially adopted December 29, 1845.

The wild nene (Hawaiian goose) was chosen as the official state bird in 1957.

The Kukui tree (candlenut tree) was adopted as the official state tree in 1959.  It was used for candles by early settlers. However, the Kukui tree is not native to Hawaii, it was brought to Hawaii from Polynesia.

The humpback whale was designated as the official state marine mammal in 1979.

In 2006, the Humuhumunkunkuapauaa was adopted as the official state fish.

Pulelehua was chosen as the official state insect in 2009.

The endangered Hawaiian hoary bat was adopted as the state mammal in 2015.

In 2008, the Hawaiian monk seal was designated as the official state mammal.

Kalo was chosen as the official state plant in 2007. It is believed to be one of the earliest cultivated plants in Hawaii. Both its leaves and roots are edible.

Pua Aloalo (yellow hibiscus) was designated as the official state flower in 1988.

Pua Aloalo grows on all of the Hawaiian Islands but is considered an endangered species because it is only grown in Hawaii and only a few remain in the wild.

What did your children enjoy learning the most about the state of Hawaii?