Sweet Home Alabama and Alabama. These are what most people think of when they hear the name, Alabama. While these are fun facts surrounding the state of Alabama, this Alabama State Study will teach your kids about its history, state facts and much more! 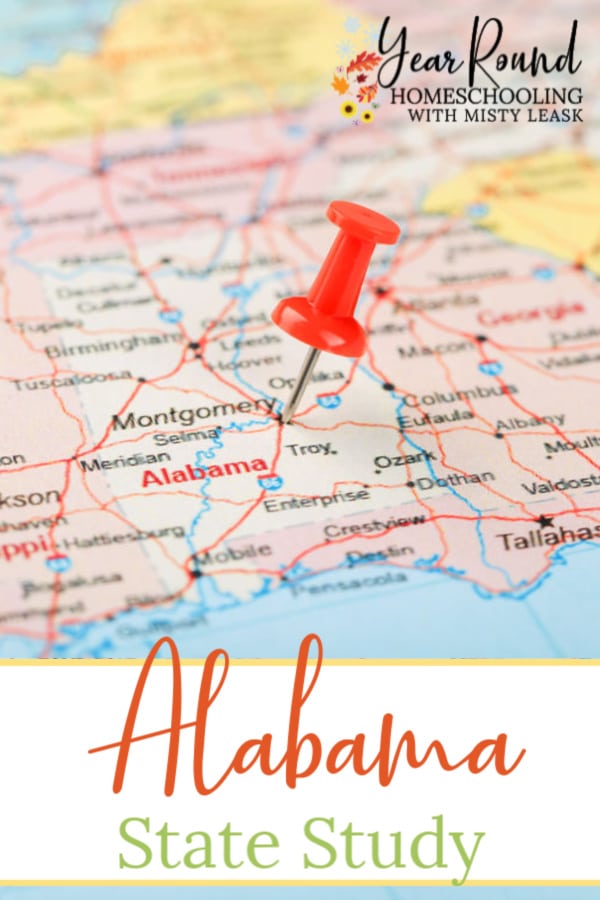 Learning about the country we live in is an important part of your children’s education. While you may not be able to visit all 50 states in the U.S. You can still ensure your children learn about the important role each state plays in our country.

History of the State of Alabama

The History of Alabama by Britannica

History of National Forests in Alabama

The state of Alabama was named after the Alabama River, which received its name from the Indian tribe that lived in the Alabama territory.

Alabama’s motto, “We dare to defend our rights”, comes from the Latin, “Audemus jura nostra defenders”.  The director of the Alabama state archives, Marie Bankhead Owen, was inspired by Sir William Jones’s poem called ‘An Ode in Imitation of Alcaeus’. This Latin phrase was included on Alabama’s coat of arms completed in 1923.

Legend says that Confederate soldiers from Alabama were called ‘The Yellowhammers’ due to the bright yellow patches on veteran’s faded, worn uniforms.

Alabama’s state song was written by Julia S. Tutweiler after she returned home to Alabama after visiting Germany.

In 1895, the Alabama Legislature authorized the official state flag of Alabama. The Acts of Alabama, 1895, state that the flag was to bear red bars of a cross similar to the cross of St. Andrew on a white background.

In 1987, the Alabama Attorney General determined that the correct shape for the flag of Alabama was rectangular, though the argument had been made that it was to be square like the Confederate battle flag.

In 1927, a bill was passed making the Northern Flicker, Alabama’s state bird.

The legislature of Alabama specified that the Southern Longleaf Pine was the state tree in 1997. This changed the previous designation of the more general ‘Southern pine tree’ in 1949.

In 1975, the Largemouth Bass, Micropterus salmoides, was selected as the freshwater fish of Alabama.

Originally, the Tarpon was designated as the state fish of Alabama in 1955. However, this changed when the state adopted the Largemouth Bass as its freshwater fish in 1975. Thus, the Tarpon became Alabama’s state saltwater fish.

In 1989, The Selma City Council requested that the Eastern Tiger Swallowtail be both Alabama’s state mascot and butterfly.

The Alabama legislature approved the Black Bear to be the state animal in 2006.

The Red Hills Salamander has been under federal protection since 1976 through the Endangered Species Act.

Originally, the goldenrod was designated as the state flower of Alabama. It wasn’t until 1999 that the Alabama Legislature recognized the Camellia as the official state flower.

What did your children enjoy learning the most about the state of Alabama?

Close Menu
×
50
To help personalize content, measure adverts and provide a safer experience, we use cookies. By giving consent, you agree to allow us to collect information through cookies.OkNoRead more